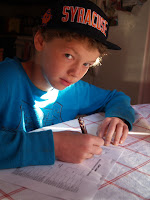 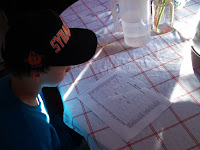 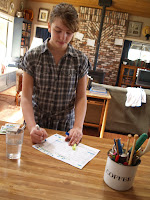 We hang our brackets on the same cord where we hang the Christmas stockings...if that gives you a clue as to how much we love March Madness in our home. Brackets are serious business, and we boldly gloat over wins and cry in agony over losses.

The first time I even heard about this March Madness NCAA tournament thingy was in 1987. We'd been married for a year, and suddenly John's granny was very, very ill. We raced to her house in Modesto and I sat by her bedside all night. I would begin to nod off to sleep, but then suddenly she would take a really, really long time between breaths; I tell you, that "between breaths" silence woke me up faster than a brass band would have. In the midst of the granny drama, I noticed that "the game" John's dad was watching was "still on." ESPN may have begun broadcasting in 1979, but I was still quite naive about the reality of twenty-four hour sports programming. Until I started waking up enough to see that the teams were changing uniforms, it didn't occur to me that this was a tournament. Like I said, I was naive.

Then there were two years in a row (maybe 1993 and 1994?) when my husband truly and honestly got the flu during the first two days of the NCAA tournament. He was able to moan on the couch while the games just kept coming hand-over-fist. It was a blissful way to pass the time for a sick guy, and in those days I got hooked.

Now I have three boys who love basketball, and two daughters who are willing to play along. Some of the family are serious students of the players, coaches and teams. Some of us are stuck in the, "Well, the Bullers live in Spokane, so let's go with Gonzaga" methodology. And some of us are just plain annoyingly lucky. Why does the daughter who couldn't care less always have the best bracket? Argh. I am still hopeful, though; if Kentucky loses soon, I could still beat her. And that would be sweet.

For the record: if I lived a different life, one that involved sending the children off to school each day, I would glue my eyes to my mother's television and watch every bounce, swish, and block. In my much more responsible life, I wait until my youngest has done at least two hours of work and then watch with him. When that is not possible, I hit refresh every fifteen seconds on my computer and give thanks for the wonder that is ESPN online.

Thursday was filled with disappointment, but Friday was sweet revenge. I have NEVER won the family bracket game, but hope springs eternal with March Madness. Maybe this year. Maybe.