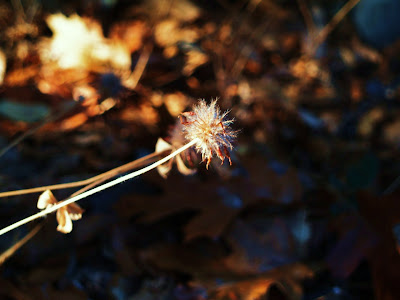 "Brother Cadfael was standing in the middle of his walled herb-garden, looking pensively about him at the autumnal visage of his pleasance, where all things grew gaunt, wiry and somber. Most of the leaves were fallen, the stems dark and clenched like fleshless fingers holding fast to the remnant of the summer, all the fragrances gathered into one scent of age and decline, still sweet, but with the damp, rotting sweetness of harvest over and decay setting in. 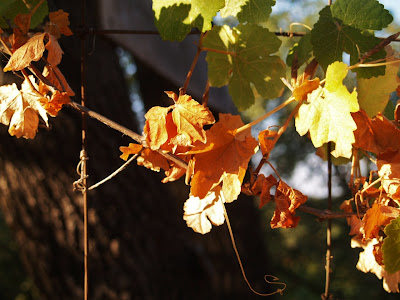 It was not yet very cold, the mild melancholy of November still had lingering gold in it, in falling leaves and slanting amber light. All the apples were in the loft, all the corn milled, the hay long stacked, the sheep turned into the stubble fields. A time to pause, to look round, to make sure nothing has been neglected, no fence unrepaired, against the winter. 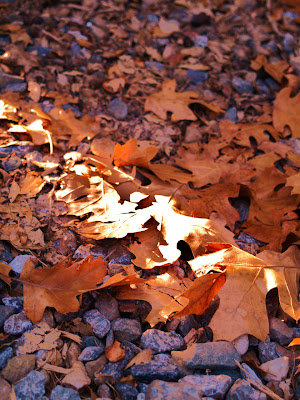 He had never before been quite so acutely aware of the particular quality and function of November, its ripeness and its hushed sadness. The year proceeds not in a straight line through the seasons, but in a circle that brings the world and man back to the dimness and mystery in which both began, and out of which a new seed-time and a new generation are about to begin. Old men, thought, Cadfael, believe in that new beginning, but experience only the ending. It may be that God is reminding me that I am approaching my November. Well, why regret it? November has beauty, has seen the harvest into the barns, even laid by next year's seed. No need to fret about not being allowed to stay and sow it, someone else will do that. So go contentedly into the earth with the moist, gentle, skeletal leaves, worn to cobweb fragility, like the skins of very old men, that bruise and stain at the mere brushing of the breeze, and flower into brown blotches as the leaves into rotting gold. The colours of the late autumn are the colors of the sunset: the farewell of the year and the farewell of the day. And of the life of man? Well, it it ends in a flourish of gold, that is no bad ending."

There are many reasons to be fans of the Brother Cadfael mysteries by Ellis Peters. If you like British history, particularly the 12th century civil war, the historical details are many and the twistings and turnings of the warring factions make a great story. But it is the tales of the abbey life that I love, the rhythms of the day and the year made perfectly clear in the pages of each book. And the word choice...is there a better word than pleasance? It is perfect.

In Brother Cadfael's Penance, the final book of the series, Cadfael feels what could be a snapping strain on his vows as a Benedictine. I have never entertained notions of being a monastic, but I have felt the pressure of commitments pulling my heart apart. Any who love both child and parent, especially when that parent is aging and ill, knows what it is to be questioning where to pour their heart at any given moment. Cadfael's struggle is one that resonates beyond the Benedictine life, even for a woman simply doing battle with her laundry pile and a desire to be (at least) three places at once.

Cadfael: Highly recommended. Click on the book pictured above to see Brother's Cadfael's Penance and to find any other books by Ellis Peters.

Harmony said…
I LOVE Cadfael! Somehow there is a peacefulness to those books that I think of as appropriate to a simpler age. Even if they do take place during a civil war :^) Thanks for reminding me of them--I need a good novel right about now.
10:36 AM

DebD said…
I love the Brother Cadfael series. So much so, that when we visited England in '96 we had to make the trek to Shrewsbury, see the ruins, and cross the Severn.

Anonymous said…
I loved that. I may have to read some of those books! I'd only heard of the BBC series, have you watched any of those episodes, and if so, do they do justice to the books?

Tell the photographer that she did a lovely job. The pics are perfect for the subject.

Wheelers said…
I love that quotation, Mama. Now you need to do the Hawk and the Dove November bit. :)