To Catch A Leaf 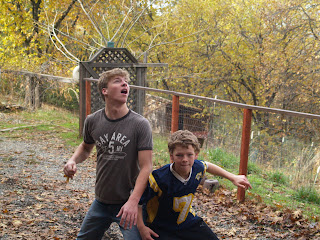 When you are a college student, and the pace of the semester is speeding up toward finals week, sometimes you have to stop and have a serious game of Catch The Falling Leaf with your youngest brother. 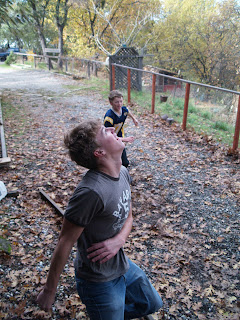 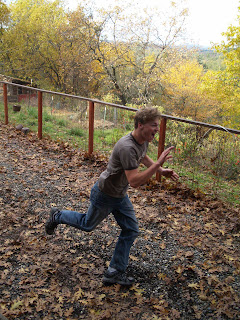 It doesn't take long, AND it gets you running and laughing and soaking up some fresh air instead of bending over the ol' desk. 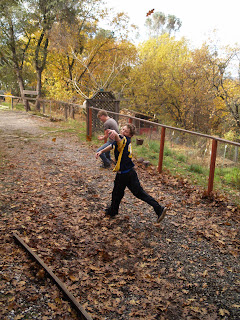 This season has seen the addition of a defensive game, including (but not limited to) shoving the Catching Competitor out of the path of the falling leaf, or going directly for the leaf and slapping it out of the way.  No tackle, but every year the rules are new and improved.  We'll see what the 2011 season brings. 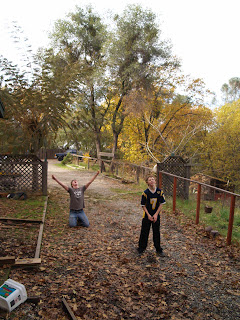 It was a win for the big brother this time. A hard-fought, joyous victory!
family fun seasons

Mary: said…
Joy - The second Candle of Advent - Catching a Falling Leaf - A rainy night with a hot mug of VanillaRooibos Tea (sorry you can;t appreciate the last - I know you;d love the smell from the decorative tin) and so many other things. I'm trying not to feel loathe about the fact that it's so soon to be Mon. morn. and escaping away here on your blog instead of grading the last of papers that have occupied most of the weekend. If you're ever here in Sacto. and you'd like to catch a great cup of Jo w/me I have Prep at 11:00 and could get away 1+hrs with you to Old Soul Cafe. Just let me know. In the meantime, hope you are having many many beautiful days.
Hugs!
5:43 PM