March 28, 2011
March Madness is not just NCAA basketball for us; there have been three debate tournaments in March.  Crazy.  I haven't had a chance to comment on debate tournament number two yet, and it needs a comment:
Ninety teams. 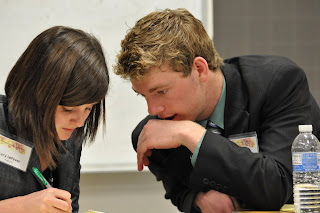 Rex and Lucy came in first.
*FIRST*
One hundred and eighty debaters. 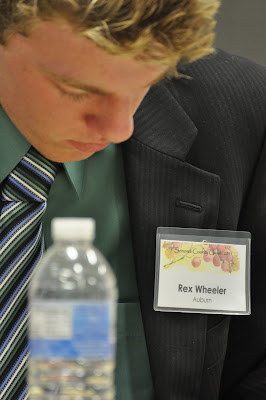 Rex was the third place speaker.
THIRD.
We had sent Rex to San Diego with friends, so we were not there in person to celebrate.  But I do believe that if our windows had been open, and Rex had been listening carefully, he could have heard us screaming with excitement.
Congratulations, son!﻿
And this last week we all went to Santa Rosa for the last part of Debate March Madness.
It was a different experience.

We laughed hard as Rex and Lucy had to debate three times in the men's locker room at the school where the debate was held.  There were no showers going while they debated, but once or twice there was a distant flush heard from across the way.  These are memories we will never forget.
And when breaks were announced (breaks being those teams who had winning records and go on to debate in octofinals and quarterfinals), Rex and Lucy did not break.  Win the whole tournament a week before, no breaks this week.
I would say I am disappointed except that, when I got on the computer last night, I read these words on my son's facebook page:
That's called competition. You win, thank God for His blessing, and celebrate. You lose, thank God for His blessing...and celebrate with the people that won.
And I am thinking that I have a lot to learn from this wise young man whom I am honored to call my son.
Well done, son!!
debate family

Anonymous said…
This actually made me get all teary. I can't imagine anything finer as a mother than to hear those words coming out of my sons' mouths!! (I had to change it from son's to sons' :-))

Susan Wise Bauer said…
Oh, SO well done!! Slivers of light at a dark time. Love you as always.
1:21 PM

Anonymous said…
Having just experienced our first debate tournament, I can now appreciate what an accomplishment it is to place first out of ninety teams.

Congratulations to Rex! Great job, and a very mature perspective on winning and losing.

Carol in Oregon said…
Congratulations, Rex! The accomplishments are magnificent and the attitude is highly excellent.

so so SOOOO proud of Rex and Lucy - in both victory and not-victory.
7:21 PM

chris said…
i am well chuffed--for Rex and Lucy, and also for you, Di! so many people would be v. pleased with themselves if they could not only savor victory, but also manage equanimity in the face of defeat (i'm put in mind of the Kipling poem 'If', which seems to me above all a paean to equanimity amidst contrasting fortunes). Going right beyond equanimity, to thanking God for his blessings, and sharing the joy of those who "caught a break",is more than just impressive: I can see why you feel honored by Rex.

i'm praying that your family and your friends will continue to bless you richly, brightening the lenten sadness.