May 05, 2011
If I had known it would take ten years for the wisteria to bloom, it would have been easier to wait.  I didn't know I was waiting; I thought I was failing.

The Eeyore voice in my head was happy to announce:  Black thumb! Once again!

But deep inside these branches there was a slow growing maturity, an extra long wait for spring's beauty. 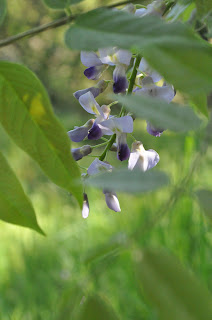 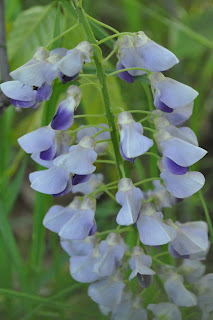 Lying in the grass, looking up at this canopy of fragrant violet, I can't believe I doubted.

But ten years is a long time to think you are failing. 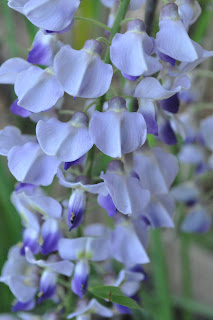 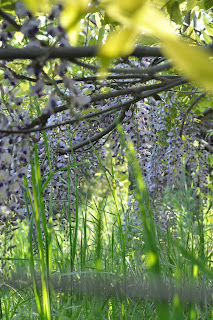 As I took deep breaths of wisteria perfume, feeling the itch of the grass on my neck, watching the light sparkle on this long, long path of beauty, I felt some tingling of hope.

Maybe these other areas of presumed failure are actually just a waiting!  Maybe there is hope!

And then I read this:


Now Thomas (also known as Didymus), one of the Twelve, was not with the disciples when Jesus came. So the other disciples told him, “We have seen the Lord!”   But he said to them, “Unless I see the nail marks in his hands and put my finger where the nails were, and put my hand into his side, I will not believe.”

A week later his disciples were in the house again, and Thomas was with them. Though the doors were locked, Jesus came and stood among them and said, “Peace be with you!”Then he said to Thomas, “Put your finger here; see my hands. Reach out your hand and put it into my side. Stop doubting and believe.”

Then Jesus told him, “Because you have seen me, you have believed; blessed are those who have not seen and yet have believed.”  (from John 20)

Lord, I believe.  Help me with my unbelief.

Anonymous said…
But you must also remember this: (from the hymnography for St. Thomas Sunday...)

Thomas, called the Twin, was not with the Disciples, O Christ,
when You came to them through closed doors.
Therefore he doubted their word.
You did not reject him for his faithlessness.
When he saw Your side and the wounds in Your hands and feet,
his faith was made certain.
Having touched and seen,
he confessed You to be truly God, not only man,
crying: “My Lord and my God, glory to You!”

Missy K said…
Oh, Diane, thank you for this post-- so beautiful I have no words but thanks.
10:24 AM

Kate said…
Mark 9:24 is always a comfort to me - Jesus hears us even in our weakness. And I am weak, sister.

Elizabeth said…
Good reminder, Mrs.W! And lovely wisteria! Mine have just begun blooming yesterday, too, and then last night the pods were bursting open and releasing seeds...a pretty amazing vine! I didn't know it takes 10 years to bloom...that IS a long time to wait, especially if you don't know you're waiting. :)
1:26 PM

DebD said…
Those are so beautiful! I love wisteria. I didn't know it took 10 years either.
6:16 AM

Anonymous said…
Such hope filled words. Thank you.
10:24 AM