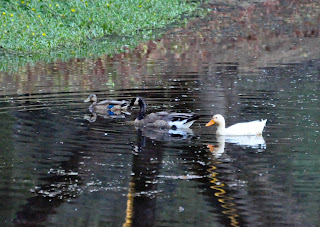 A white duck appeared on the pond about four or five months ago, all by itself, and it is waddling and paddling around whenever I drive by.  There are dozens of mallards, some wood ducks and coots, but just this one white duck.

Did the neighbors who recently moved leave him behind?  He does sometimes cross the road and go wandering through their yard, looking more at home there more than he does in the big pond.

He has caught my imagination, and I find myself making up stories about the little white duck as I am driving.  He is always mingling with the Canada geese, imitating whatever they are doing, and I have him pegged as a very earnest, somewhat insecure little fellow who would love nothing more than to belong.  He is most carefree when he is the middle of the geese crowd; it is then that you can see him diving down, his tail feathers wiggling above the water line, while below the surface he is fishing or playing or whatever it is ducks do in the water. As the geese move along, he quickly catches up with them and slaloms in between the larger, darker birds.  When swim time is over, and the geese somehow signal it is time to march single file up the hill to the kind neighbors on the left, he knows the secret code and pops out to get in line with them.  He waddles along, and he seems to be saying, "I am so happy to be here."

I need a name for this little fellow (assuming that he is a he...I am only guessing.)   Any suggestions?
Birding Hollyoaks nature Writing

Hmm, sounds like you're definitely thinking of him as male. Better run the INFALLIBLE frog-in-throat test: when he quacks, does he actually sound like a duck or does he sound like he has a frog croaking in his throat? Remember that's how our drakes always used to sound. :) :)
9:13 PM

Rose said…
Assuming he is a he, I think the name Delbert is good. I am working on some cases (I'm a paralegal) and the person's name is Delbert. Your duck looks like a Delbert to me.
7:36 AM