The ministry of tears

When my sister died in 1993, I had three children, ages three, almost two, and a wee little three month old baby.  They were each so little and all so in need of a functional mother.  At one point in the days after Liz's death, a friend of mine shared a concern:  "I don't think you are crying enough."  At the time, I was hurt by her assessment.  I felt pressured to do this grief thing right, and the idea of being a failure, on top of all the pain of losing my sister, was horrible.

The thing is I was convinced that if I started crying I might never stop, and then what would happen to my dear children?  What if I could not care for them?  And so it is true:  I did not cry enough.

As I look back over the last seventeen years, I realize that what began in 1993 as a way of surviving and caring for my children has become a bad habit, an unhealthy thing.  I have been unable to cry in a cleansing, cry-until-you-are-done sort of way since those dark days of 1993.  That is way too long.


This last week has been very difficult for several reasons.  In my distress, I reached out to a friend of mine, a monk I had met through friends, and he sent this advice to me:


"Shed tears, lots of them."
As I read those words, something in me cracked, broke, and opened wide.  Tears are flowing, and it is a very good thing. 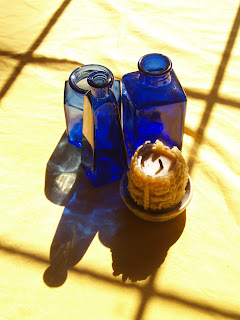 The ministry of tears, my own tears, is a gift I didn't know to ask for.  It was a freedom that had so long been denied that I could not offer it to myself, but it was a great gift to be given permission to simply cry.  Now in sorrow and in worry I can feel the balm of the Holy Spirit washing over me, healing me, bringing me hope in the midst.  It is so good to be crying again.
In my distress I called upon the LORD, and cried unto my God: he heard my voice out of his temple, and my cry came before him, even into his ears.
Psalm 18:6

What do blue bottles have to do with tears?  See my post here.
bible Photography

Cyber hugs and prayers for your ministry of tears. I heard sad news yesterday involving a family we are close to who have already suffered much pain in recent years. As I prayed for them, the tears unexpectedly flowed and I was thankful to offer them along with the prayers.

I love this line in the Memorare:

"mourning and weeping in this vale of tears".

elizabeth said…
Yes. Tears are so important. So glad you have been given them; it took me a long time to learn to cry too. Hugs and prayers today. and Memory Eternal to your sister.
4:49 AM

Yes, last week was hard. Still is. But what a comfort is that bottle for those tears.
10:01 AM

stephseef said…
your writing always moves me.
i join you in the weeping.

Going forth with weeping, sowing for the Master,
Though the loss sustained our spirit often grieves;
When our weeping’s over, He will bid us welcome,
We shall come rejoicing, bringing in the sheaves.

--i always thought this hymn was silly when i heard it on 'Little House on the Prairie'. Now that I have known grief personally, I can't stop singing it.

Love you, Di. Honored to pray.

Les said…
My daughter lost her only sister five years ago. I don't think she's cried enough. I wish she could, but she's only just now 27 and not worried about her own well-being. I may send her a link to your post...but I'll wait until after the holidays. It's a difficult time of year for us...

Kathie said…
Thinking about you, praying for you, and sending love,

tonia said…
oh dear friend...and to think you were here,so close! i wish i could have come given you a hug and listened over coffee. i am adding you to my prayers today and hoping your time with M is restoring your heart. sending such love.