November 09, 2011
Originally posted in November of 2005, I post this again in honor of what would have been my father's 82nd birthday. 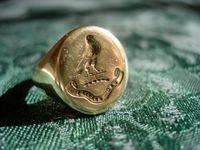 Today would have been my father's seventy-sixth birthday, and I have been thinking of him all day. Actually, he has been on my mind since October 24th, the day he passed away in 2001. Grief, as I have said before, is a confusing and complicated journey, but the loss of my father was made more so by our life together. My father's decision to pursue his financial dreams and extra-marital affairs meant that he chose not to be there for the ordinary days of family life. He moved out when I was just five, and we had a distant relationship for years.

There came a time, after I had begun my own family, when I realized I needed to forgive my father for not being there as I was growing up. It was something I needed to do for my own emotional health, as well as something that was necessary for any relationship to exist between us. First, though, I had to be honest with myself about the wrongs. That was difficult and seemingly counter-productive. I knew I didn't want to stay stuck in the muck of blame and bitterness, but in order to say, "I forgive you" I had to acknowledge what it was that went awry. Forgiveness is not denial, it is not "looking on the bright side", it is not "That's okay." Forgiveness is facing the truth, and that meant the truth about me as well as Dad. I had experienced the life-changing forgiveness of Christ; how could I possibly withhold my forgiveness from another person, especially someone I loved so deeply? It was like a breath of fresh air that I hadn't breathed for decades. It released all the unrealistic expectations that my father could not meet. It released me from the fear of failure as a mother, and it allowed me to experience deep and lasting peace.

I would not be the woman I am today if it wasn't for my father. Some of that I learned from his negative example. I have a deep desire to be trustworthy, I am very wary of mingling family relationships and financial dealings, and I looked for (and, thank God, found) a man who is faithful in the ordinary moments of life. My commitment to enjoy today, with all the budget constraints and laundry and ordinary-ness, comes from watching Dad always dream of something big that we could do together someday. Someday never came for him, and there were decades of ordinary days that were missed in the dreaming. I also learned from his positive example. I read, I pour over maps, I play tennis, I love to travel, and I enjoy conversations with all kinds of people; I even enjoy dreaming big dreams. These all reflect the positive impact he had on my life.

We had eight joyful years of peace and forgiveness, my father and I. We talked on the phone, blabbing about home education and politics and memories and my children. But, emphysema did its dreadful work, and Dad entered the hospital just after September 11th of 2001. I made a mad rush back to his home in Tennessee, only to sit by his hospital bed and pat his hand. I cried and prayed and talked to him, even though they kept telling me he was too sedated to hear. I wanted him to hear again that I loved him, that I prayed for him, and that I would miss him terribly. I have no doubt that he knew I was there.

I loved my father deeply. I miss the smell of his aftershave and the sound of his kingly voice. Today, in honor of his birthday, we got out a tape that he and my step-mother made for us for Christmas 1996. Dad begins the tape with a description of the beach where they were sitting, the sound of the gulls and the crashing of the waves. He read of St. George and the dragon from Bill Bennett's Children's Book of Virtues

My youngest son, whose middle name is his grand-dad's, sat and listened for a long time, luring his sister to join him. It was a great way to remember Dad.

I also wear my father's signet ring each day. It bears the words "Deo Gratis", Thanks be to God. Tonight, I am taking extra time to thank God for His forgiveness, and for the time I had to know and enjoy and learn from my father. I will always wish we had more, but there is a lesson to learn even in that. There will come a time when I will have no more days here on earth, and I need to remember that each ordinary one is a gift! Thanks be to God, indeed. 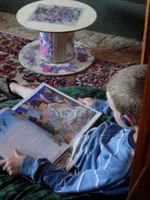 He was blessed to have you as his daughter.

elizabeth said…
I can't tell you how beautiful, deeply moving and hope-giving this post is. Thank you. I rejoice in the reconciliation that you were able to have with you father. May God remember him in His Kingdom; Memory Eternal.
2:52 PM

Carol in Oregon said…
You have a book in you, my friend.

What a most beautiful redemption story. I'm so very thankful that the reconciliation took place before the division that death brings.
8:56 AM